The Tangmere Military Aviation Museum is a museum located on the former site of RAF Tangmere, West Sussex. Many aerospace exhibits covering the First World War to the Cold War are on display including fixed-wing aircraft, helicopters and aircraft engines.

Challenge: Tangmere have noticed a significant change in demographics over recent years and set a key priority to ensure that their history can be shared with a new wider audience including their Polish and other European visitors. The Museum benefits from a large volunteer base who often give guided tours, therefore any solution needed to be considerate of and compliment the tour guide offer.

The Solution: ATS’s experienced audio guide production team supported Tangmere with the initial scoping of the project brief in order to apply for funding. After successfully securing funding, our scriptwriters liaised closely with the museum curators, to develop a tour that depicted the history and stories of the museum, but also made it accessible for both first time and repeat visitors. Starting with the factual guidelines of the key exhibits, the creative team explored and wrote a new narrative that improved accessibility for a broad audience.  The audio tour was produced with a lead narrator, authentic sound effects and period music. The audio tour was translated and produced in foreign languages using native speaking professional voice overs.

Trevor Clark, Tangmere Curator said “I found the whole process very easy, once we had decided on which key exhibits would feature on the audio guide. We provided a detailed factual guideline of each of these exhibits and the ATS production team took that and turned it into a very enjoyable and informative audio recording. The voice of the narrator has been very well received by our visitors too. We are still very much in our early days with these audio guides, but so far they have proved simple to operate and very easy to look after.” 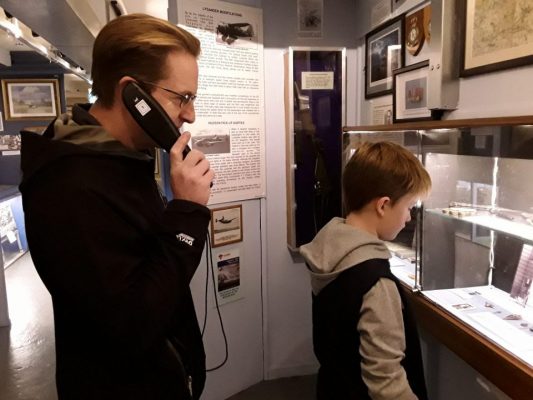 What we did for Tangmere Aviation Museum